You are here: Home

At the Trustee meeting on 23 July 2012, the following were among the items discussed.

A new trainee has started at Stockport Museums and will be helping with cataloguing the finds and archives from the Mellor Old Vicarage excavations.

In the revised Trust deed, Norman Redhead will become a representative Trustee for the Greater Manchester Archaeology Advisory Service.

Maxine Wild presented several logo designs, which were based on the decoration on Mellor Church font. The Trustees chose:

At long last, an agreement has been signed to transfer the area comprising the Roman garden, the bridge over the Iron Age ditch and the viewing area with interpretation boards, which is a gift from the Hearle family, to the people of Stockport.

The bid to HLF, jointly with British Waterways, for "Revealing Oldknow's Legacy: Mellor Mill and the Peak Forest canal in Marple" has been submitted.  The application includes a map of the area of the project, drawn by Neil Mullineux and including the boundaries of Oldknow's estate (see end of note).

This year's dig at Shaw Cairn was hampered by bad weather.  There are plans for a bigger dig next year involving Sheffield and Manchester Universities, as well as Mellor volunteers.

The following events are proposed for next year: 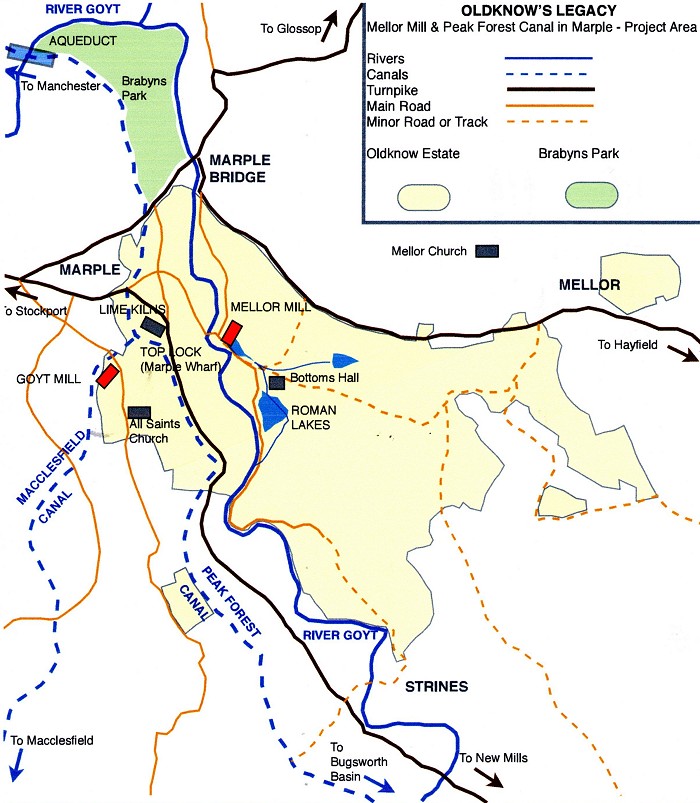